Just to let you all know Jas has won “GOLD” at the Central England Karate Championships! Jas informs me the venue was magnificent, eight mats on the go. Jas was the only fighter from Black Sun to enter the championships, so it was even greater to see him win Gold at such a major event. Jory & Jas have certainly lifted the level of fighter here at the Black Sun. He was well supported by John Tuman and senior squad coaches on the day. A big thank you to Shindo Kai for the support needed to win at such a high level.

So well done to Jas! Who seems to get younger the older he gets!

He is a credit to everyone moving into that part of their lives where they think they are to old to fly at such a great height.

He is and still remains one of my great inspirations to keep the dream alive.

Well done again Jas! Or should that be young Jas? (he would have you all believe he’s young Jas! But I know better).

Sensei Andy & all at the Black Sun. 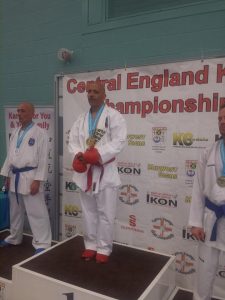